the pulmonologist cautioned us about baby girl’s “first illness.”

each visit, he would remind us that she will, indeed, become ill, catch a cold, get a virus…i brushed it off because i already have a child, so i’d like to say i’m not a nervous-nelly-first-time-newbie-momma when it comes to her kids getting sick.

i don’t freak out and call the doc the second there’s a cough, sniffle or even a low-ish fever.

but when i hear a sudden barking sound coming from my 6 month old, who was recently diagnosed with cf, i did exactly what dr M was cautioning against;

not even a little bit of exaggeration here.

so as i picked up the phone — who the heck do i call first??

without boring us all with the details, she had croup and was prescribed liquid prednisolone.

no biggie. pretty much what any other baby gets prescribed.

we move along with our weekend and she gets better.

suddenly, again, instead of the barking, it’s a rattle-ly, bronchial cough.

so i did what any normal mother would do.

i call both docs and leave messages.

at this point, she’s wheezing and her breathing is labored.

while we wait, little C and i sing to baby girl and she’s able to calm down and fall asleep, for a bit. 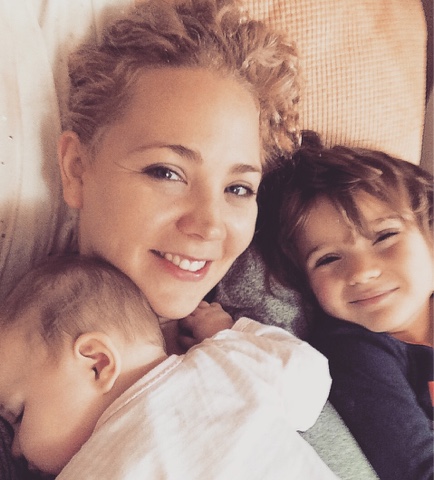 right after this picture was taken, time sped up and actually became a comedy of errors, though i’m not laughing yet…i was trying to get little C to school. yet, i needed to put both car seats back in the car and naturally baby girl wouldn’t let me put her down, ’cause she was so sick.

both doctors call me, one right after the other, as I’m pacing the floor watching baby girl’s belly;

much faster than a peaceful breath.

her belly would go hollow with her inhales.

in the bathroom, little C sits on the tub, as he normally does, for me to comb his hair, and somehow manages to sit on the shower curtain, in turn, making the whole rod and curtain fall and encase him.

he tumbles backwards into the tub.

i sit on the toilet holding her and holding him, while we all cry.

(thank God he was totally fine)

meanwhile C needs to be at pre-school.

a friend comes by and takes him.

i finally get baby girl settled and we head on over to the pediatrician.

from there, it’s the normal stuff.

baby girl is check out, and the plan for action is discussed.

“we are treating this aggressively so she won’t end up hospitalized.”

this was the moment that my panic was justified.

i wasn’t being a crazy, frazzled mom.

moments later, she’s on the nebulizer with albuteral and a steroid.

plus her liquid steroid twice a day.

and of course the usual two enzymes with every feeding, which is like 8 times a day…

...we are doing much better now.

she’s a little pro with her breathing treatments, too.

i’m hoping we can make it through this winter unscathed.